From Cannabis
(Redirected from Asia)
Jump to navigation Jump to search

From Facebook photo page for photo below:
"Only 5 of us in Malaysia. It's not the number that counts, it's the determination that matters."
2012 Global Marijuana March in Kuala Lumpur, Malaysia. 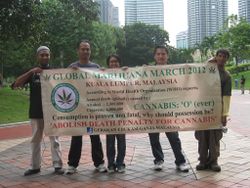 Click for larger version of the photo, and more info. And go here and to the template.