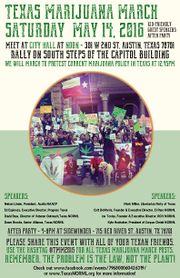 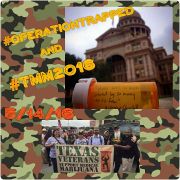 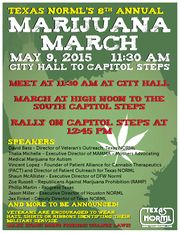 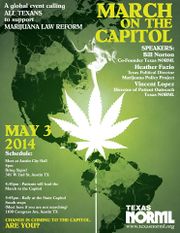 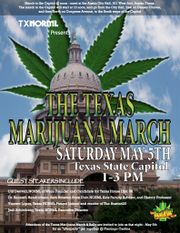 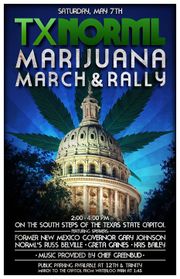 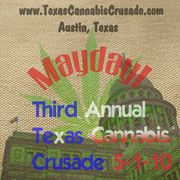 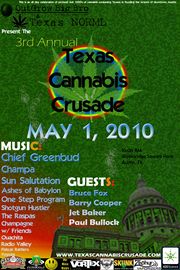 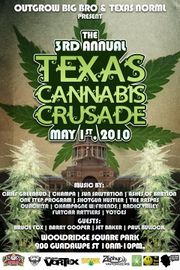 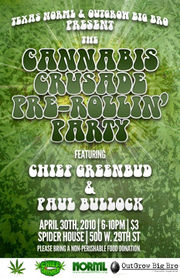 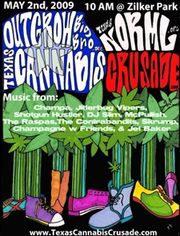 The May 5th 2012 Marijuana March brought to you by Texas NORML will begin at 12:00pm Noon.

Together we CAN make a difference.

If you would like to join thousands of Texans flooding the streets of Austin in the name of cannabis reform, please join us this year on May 1st. We will convene at Wooldridge Square Park at Ninth and Guadalupe in downtown Austin around 10:00 AM.

Please note that this year’s crusade WILL NOT be held at Zilker Park. We have enjoyed the last few years at Zilker’s Pecan Grove, however, thanks to the overwhelming response from cannabis consuming Texans statewide, our expected attendance this year will exceed the maximum capacity of the park.

We are happy to be able to host our event in this historical park. We will speak to you all from the same stage that Lyndon B. Johnson announced his bid for the presidency from. Over a century ago, the park was used as a city dump. So, to ensure that we don’t turn it into a dump again, we will have recycling stations at each corner of the park.

Remember, we are trying to show the world that cannabis consuming Texans are respectable people (which we are), and that we deserve to be treated as such in the eyes of the law. (which we currently are not) Please conduct yourself accordingly.

Things you should not bring

There is limited available free parking. The metered parking spots in downtown are free of charge on weekends, but they will fill up fast. Austin residents are advised to check bus schedules or car pool to assist with the limited parking issue.

There are a number of pay to park garages within walking distance from the park. Below is a map of the local parking garages. Remember, you will have to pay to park in these garages.

If you are planning on traveling in from out of town and need a hotel room, below is a map, listing several hotels in Austin.

Mark your calendar, and recruit as many of your cannabis consuming compadres to join you at THE THIRD ANNUAL TEXAS CANNABIS CRUSADE on May 1st!

Austin: Hector Sanchez hector(at)outgrowbigbro.org or Brad(at)TexasNORML.org 512-902-4447 . March from Zilker Park to the Capitol Building for a free concert/rally for legalization on the South Steps. We will then return to Zilker Park for a "Pot Luck for Pot Love" with music and food until 9:00 PM.