From Cannabis
(Redirected from Boulder)
Jump to navigation Jump to search 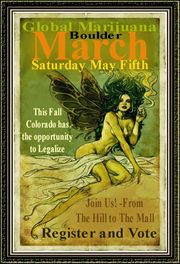 Boulder: Jeff Christen-Mitchell Hemptopia(at)comcast.net http://www.hemptopia.org http://www.Anti-DrugWar.org 720 275-0319 . March from the Hill at 4:20 pm, from 13th & College to Broadway through the Pearl Street Mall west to east.

In 2008, Boulder, Colorado, will participate in its 4th continuous Global Marijuana March. Called 'The Hill to the Mall', it will assemble on the Hill at 13th and College Avenues, and roll at 4:20, ending in Stoner Park. The March is hosted by www.Hemptopia.org, which also tosses a Valentine's Day Anti-DrugWar Candlelight Vigil as well as an April 20th 420 in Central Park.

US middle-class wealth has collapsed. [105]. See chart below.

Medicaid, Medicare, Social Security all came from Democrats. You pay the taxes while healthier. Republicans prefer you die. 50% in U.S. Fear Bankruptcy Due to Major Health Event. [109]