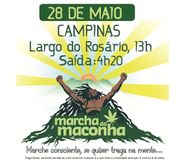 About 150 military police officers and Guard tried to fulfill the court's decision and prevent the realization of the Marijuana March in Campinas (SP) on Sunday. However, the protesters ignored the ruling and mobilized in the streets after replacing the name of the rally with a march of shame, against allegations of corruption involving city officials.

Politicians of the first echelon of the city as well as business and servers, were accused of a scheme of fraud and bribery charges in procurement of Campinas. The corruption investigation culminated on 20 May with the arrest of 11 of 20 people against whom warrants had been issued. The deputy mayor, Demetrius Vilagra (PT), who was in Europe and was considered a fugitive, was arrested when he arrived in Brazil on Thursday, being released about 24 hours later.

Scheduled for 13h, the mobilization began under heavy police surveillance. During the protest, about 150 people called for the decriminalization of marijuana. Young people, most aged up to 20 years, insisted on shouting slogans like "Out Dictatorship", "Legalize already" and "We want to talk."

The Marijuana March was banned by Judge Maurice Henrique Guimarães Pereira Filho, of the 5th criminal court of Campinas. The judge justified that "it is not the magistrate, this time make any judgment about the intention of seeing the size and consequent use of cannabis sativa L, elencada as an illicit drug to be decriminalized, but to analyze and eventually curb practices that frame types are incriminating criminal and have nothing to do with the desire to see healthy changes to criminal law."

The evil history of the US Senate filibuster, or why the US no longer has simple majority rule. [106].

US middle-class wealth has collapsed. [108]. See chart below.