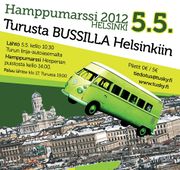 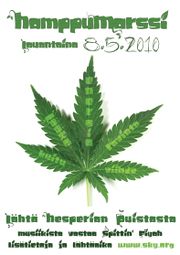 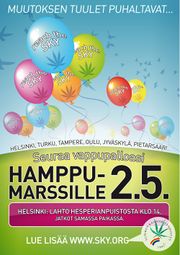 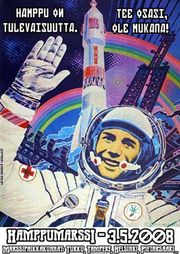 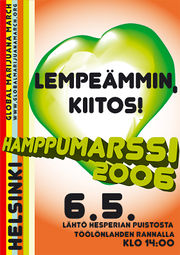 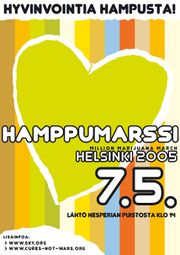 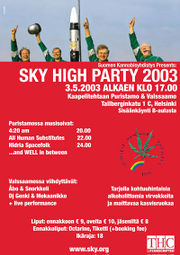 In Finland there were demonstrations in six cities: Helsinki (100-400), Turku (100-200), Tampere, Jyväskylä, Oulu (80) and Kuopio (18). This year's theme was "More tenderness, thanks!" based upon findings that the new system of giving fines instantly has increased punishing just cannabis users 40% since 2001.

In Helsinki GMM2006 demonstration happened in a heavy military atmosphere. There had been clashes between police and youth during the first of may celebrations and a group of hundreds of young men had fought the riot police off their party in an old demolition house right in front of the parliament house. That caused heavy repression and news coverage because attacking the police is really uncommon here, it's almost a taboo. Then 5.5. on Friday the whole place was burned down and panicking police officers tried to cancel our demo. Finland is also going to be the next chairman country of EU and the police cannot control the central area of Helsinki. So our interior minister Kari Rajamäki was also panicking and putting the blame on foreign influences and hiding top men.

So our theme was more than actual, hemp march in Helsinki had become a peace march with hundreds of courageous people participating into it with very heavy police escort. In other cities police nowadays just check that everything's OK and then leave demonstrations in peace. But in Helsinki The State had to show himself to the public after two major failures. Of course this kind of show of muscles scares most of the "ordinary people, who also smoke cannabis" and thus fulfills the conception of public that this belongs to less ordinary people.

On Saturday midday the whole center of Helsinki was like occupied territory with thousands of spectators, even tourists on surprisingly hot temperatures round 24-25 C, in May in Finland like just another proof of greenhouse effect.