From Cannabis
(Redirected from Phoenix, Arizona)
Jump to navigation Jump to search

Share link: Phoenix. Local or regional cannabis-related links wanted. See more links on these pages: Arizona and United States. See cities by country on GMM map of all cities. See all cities (not just Global Marijuana March). See the yearly city and event lists for additional Facebook and other links. 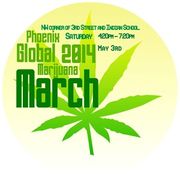 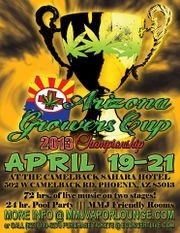 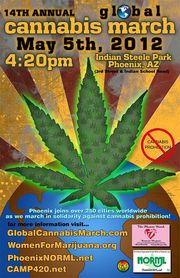 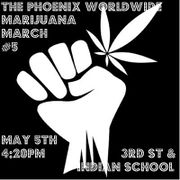 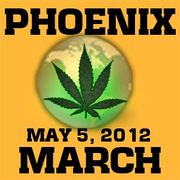 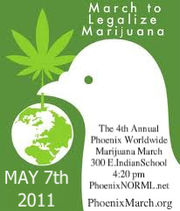 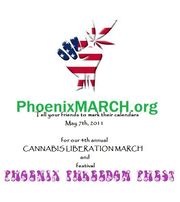 Volunteers Needed to spread the word!Please e-mail the above address if you are interested in making or distributing flyers, if you have a store or club you would like to promote by contributing, anyone who is in or has a band who would like to be a part of the demonstration--Anything! Please let us know--This is YOUR demonstration, Phoenix!! I am only organizing because I know you guys are out there! Go to the march sites of other cities for more ideas/suggestions. :D Visit Norml.org MPP.org and Saferchoice.org for more information on how we can get medicinal use/decriminalization on the ballot in AZ in '08. We did win that one a few years ago...Now we have more people who have moved here (some from Medical states..) so let's try again to reform Arizona's current marijuana laws!

Let's show up to support the decriminalization of marijuana for responsible adult use!

Show support for obtaining medicinal rights in Arizona! We are surrounded by medical states.

Turn out to show that you believe marijuana is a much safer alternative to dangerous, violence-inducing alcohol!!

Show up because you believe, as an American, you have the freedom to chose to use a safer recreational alternative to alcohol.

Report from www.myspace.com/phoenixmarch page (emphasis added): - "This year's march was held on Saturday, May 3rd at 4:20pm, along with over 200 cities across the globe. The turnout was fantastic- an estimated 1,500 people marched for cannabis liberation along Indian School Road in central Phoenix. We had musicians, comics, hemp ice cream sandwiches, otter pops, tie dyed banners, beautiful protest signs, great music great people of all types; young, old, male, female, gay, straight, bisexual, Americans from around the country, immigrants from around the world, virgin marchers, experienced cannabis activists, medical marijuana patients, political activists, voters, students, businessmen, the great people of Tucson NORML who took a journey into the Big City for the day, animal rights activists, TONS of media coverage, little to no police intervention, free magazines with GMM coverage... It was a truly beautiful day. Here's some video coverage of that special afternoon ..."

It was a good turnout for us. About 75 people showed up. We had 2 bands and we rallied in the street and in the park. We didn't march. I'm attaching some pictures. I'll send more in the mail. I also saw on the website that you only have Kayler Russel as a contact. I would also like to be known as a contact here. Me and her worked together and we will work together next year.

Facebook image source with comments. Info: [99].
The quote from John Ehrlichman (in 1994) is from an April 2016 Dan Baum article in Harper's Magazine: Legalize It All. How to win the war on drugs. Quote: “The Nixon campaign in 1968, and the Nixon White House after that, had two enemies: the antiwar left and black people. You understand what I’m saying? We knew we couldn’t make it illegal to be either against the war or black, but by getting the public to associate the hippies with marijuana and blacks with heroin, and then criminalizing both heavily, we could disrupt those communities. We could arrest their leaders, raid their homes, break up their meetings, and vilify them night after night on the evening news. Did we know we were lying about the drugs? Of course we did.”

US middle-class wealth has collapsed. [102]. See chart below. See: Income inequality and drug war. And: Wikipedia: List of countries by wealth per adult.? Median wealth is exactly in the middle. 50% of adults have more, and 50% have less. Wealth is all assets (money, stocks, property, etc.) minus all debts.

Medicaid, Medicare, Social Security all came from Democrats. You pay the taxes while healthier. Republicans prefer you die. 50% in U.S. Fear Bankruptcy Due to Major Health Event. [105]