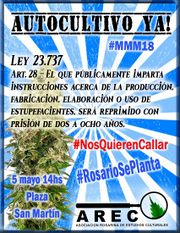 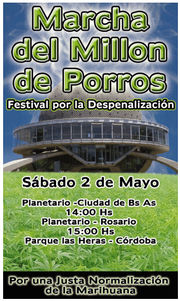 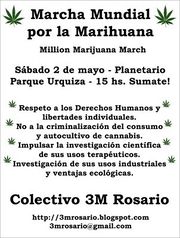 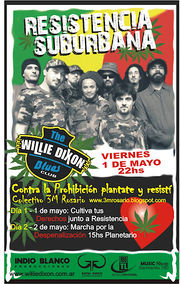 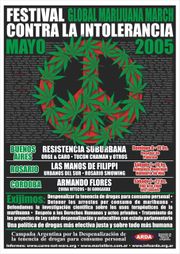 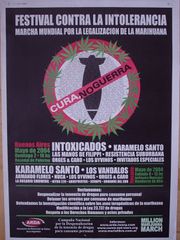 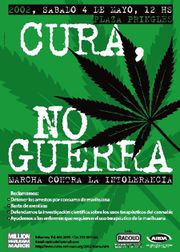 "The march in Rosario was great," said Silvia Inchaurraga of the Argentine Harm Reduction Association (ARDA). "In the first march we organized here in 2002, there were only a handful of people, and now we have more than 1,000," she told the Chronicle. "We don't need more speeches from politicians, even progressive speeches, we need a new drug law and a new drug policy. Despite the Supreme Court rulings of 2009 [decriminalizing marijuana possession], the old drug law is still in effect and drug users are still arrested and punished, and harm reduction is not the official policy of the National Secretary on Drugs."

On Saturday, May 7, more than 5,000 people gathered in the Humberto de Nito Municipal Amphitheatre in the city of Rosario, Argentina, in the Festival Against Intolerance, organized by the Harm Reduction Association of Argentina as part of the "Global Marijuana March."

It was the fourth Festival Against Intolerance held in the city of Rosario. Last year, it drew thousands of people to demonstrate in favor of the decriminalization of drug position for personal use. Similar demonstrations take place in 185 cities in 37 countries around the world. This time, more than 5,000 people were part of a real party, where local bands like Urbanos del Sur, La Rosarion Smowing and the very appropriate Movil Vission, from Buenos Aires, who played songs about do-it-yourself marijuana cultivation as well as legalization. The well-known band Los Manos de Fillipi closed the evening, the amphitheatre shining with many colored flags and a unanimous cry in favor of decriminalization.

Many representatives of the Argentine Network in Defense of Drug Users' Rights (RADDUD) were present. When they expressed themselves, they found a great echo of their sentiments among the crowd, who kept applauding, adhering to the general message of the event.

For his part, Dr. Gustavo Hurtado, Secretary of the Harm Reduction Association of Argentina (ARDA) emphasized to the great crowd: "Today we are here to decriminalize the possession of drugs for personal use, to end the arrests for marijuana consumption, to defend scientific investigation into the therapeutic uses of cannabis, for respect for human rights, for the passage of the two decriminalization proposals now before the Senate and the Chamber of Deputies; one presented by Senator Diana Conti of Buenos Aires and another by Deputy Eduardo García of Córdoba."

ARDA maintains that Argentina's drug code, Law 23,737, fills the country's jails with people arrested for the mere possession of a substance. The numbers bear this out: of the 300,000 open cases of infractions of this law, more than 200,000 are for possession or possession for personal consumption.

Hurtado spoke strongly: "What is clear is that what the Argentine State does is to direct all of its capacity for action against users, to whom it should offer different kinds of alternatives in education, health, and social inclusion, instead of responding with the punishment and criminalization of acts that are private. Concrete battles must be given in concrete places. When a law must be changed, that battle must happen in Congress. What we are proposing and pushing for is to change the punishments and criminalization of drug possession for personal use. That is, that they stop imprisoning use for having a joint, a piece of paper, a pill. The State should not interfere in people's lives because the damage done by criminalizing people is much greater than that which it seeks to prevent. "

In this battle, which is being waged from various sectors in Argentina, two concrete projects stand out. The first was the 2003 proposal by Deputy Eduardo García, of the Socialist Party of Córdoba, to change the wording of article 14 of the current law, and the second was Senator Diana Conti's similar proposal to the Senate.

The Fourth Festival Against Intolerance in Rosario was part of ARDA's National Campaign for the Decriminalization of Drug Possession for Personal Consumption.

ARDA has been calling for a debate in Argentina for a long time on the social and subjective costs of prohibition and the problem of the persecution of drugs; on the dangers of drug use, the myths associated with drugs it and the risks and damage of their prohibition. These risks come from drugs' alteration, the lack of information about them, and the risks and harm associated with the conditions in which they are consumed. ARDA insists that prosecuting drug possession puts the consumer in a situation of illegality and criminalization, which distances him from the health system. In Argentina we must have a difficult but necessary debate about drugs and the failure of prohibition.

Deputy Eduardo García made an appearance at the Festival and in a short speech said, "today's goal is for all of us demonstrate for this right that is being violated by the current Narcotics Law, which in fifteen years has arrested, tried, and punished 283,000 people in our country. This law has punished young people, the majority of who had never entered a police station and had no criminal record. This law has imprisoned and punished people who had less than five grams in their possession. While all this was happening in our country, the drug business grew." He expressed clearly that decriminalization in Argentina is necessary not to say that "drugs are good, but rather so that we can take on a serious debate on the drug problem."

From 4 p.m. until nightfall, people enjoyed a great event, which beyond being a rock show, let the most conservative sectors in Argentina know that there is now a favorable movement within society towards debating drug policy from a perspective that respects people's differences.

US middle-class wealth has collapsed. [124]. See chart below. See: Income inequality and drug war. And: Wikipedia: List of countries by wealth per adult.? Median wealth is exactly in the middle. 50% of adults have more, and 50% have less. Wealth is all assets (money, stocks, property, etc.) minus all debts.

Middle class wealth collapsing. [125]. And: Just 8 men own same wealth as half the world. See Wikipedia: Wealth in the United States.