From Cannabis
(Redirected from Warsaw)
Jump to navigation Jump to search 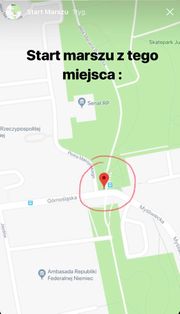 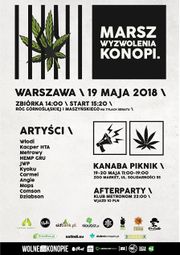 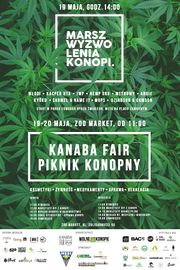 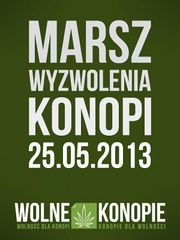 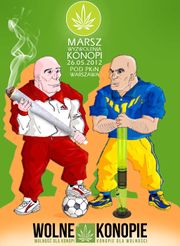 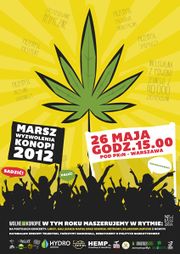 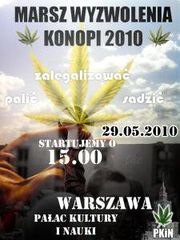 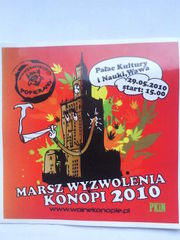 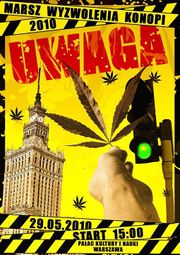 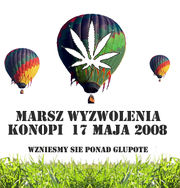 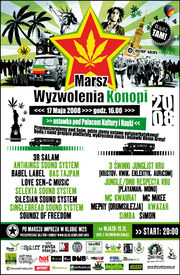 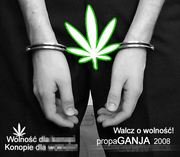 Report (from old GMM site): The Polish "Free Hemp March 2008" was a great success, over 3000 people marched with us to the government buildings in Warsaw. In the evening there was a fantastic MMM Afterparty, about 350 people came to it and it lasted until 6am! All the best, Alexandra and all at Hemp Lobby and Wolne Konopie (Free Hemp).

Million Marijuana March in Warsaw, conducted by Association for Rational and Effective Narcotic Policy – KANABA, occurred as a last of 207 marches all over the world. Despite of downpour, more than 1200 people demanding for legalization of marijuana marched through center of Warsaw.*

March began in a front of Seym building, where group of 300 people gathered. Just before it started, heavy rain had poured. A few people raised a laugh by saying, that God was crying and thundering, seeing the foolishness of polish parliament.

In spite of bad weather, there were more and more of us from minute to minute. Music from platform and melodious voice of Mewa from “PFK Sk?ad” were warming the crowd.

Suddenly, a first surprise happened. A group of superheroes – Batman, Spiderman and fearless Flash Gordon – jumped onto the platform. It turned out later, that our amusing friends were from Switzerland.

Another surprise: Just behind president’s palace, we met a demonstration of “Students Initiative”. They were emphasizing their dissatisfaction connected with appointment Roman Giertych as Minister of Education. They joined us and we started to exclaim “Krzak tak, Giertych nie” (“Yes for plant, no for Giertych”). We moved out briskly towards the Castle Square, where – after symbolic streetparty – we finished our march.

Plant, smoke, legalize' - these were the most often heard words on the 7th of May in Warsaw. Except for the momentous hail, it was a beautiful sunny day. About 3 pm under the circus in Wiejska street, which officially is our Government, people with a little bit of sense of social duty began to gather. But not only them - MMM was appointed with the city, so guys in blue also appeared. Were there many of us? It depends - if you compare it to the number of illicit drug users in Poland, or even only in Warsaw, then no, there were few of us. But compared to the last year's attendance, there is what to be proud of - this time almost five times more people arrived.

The time had came - we got off! A line of participants started to form behind a little truck with sound system, and full of pro-legalize banners (which we will call a platform from now on). After a while, our peace pageant reached the Three Cross Square. To the drivers' astonishment, and passer-by's interest, about one hundred meters of Warsaw main street, Nowy Swiat, was totally intercepted by loud group of MJ users. Boys and girls with loudspeakers were doing their best. Microphones were occupied by the Kochankowie Gwiezdnych Przestrzeni band, Robert Brylewski (Izrael, Brygada Kryzys) and guys from Kanaba.

Beside smoking accessories, given in the crowd as a part of Hemp Lobby, about 5kg of cannabis seeds were distributed. When we achieved Krakowskie Przedmiescie street, there was a little clash with police, which tried to arrest one of us. Whole march stopped, and 300 people started to shout: 'let him out!'. After a short time of uncertainty, we went on altogether.

Next stop - the President's Palace. While listening to a summary of most important facts about current European drug policy by Artur Radosz, many people shouted "even Kwass smokes grass' [Kwass stands for Kwasniewski, the polish President]. Then we headed for our destination - Plac Zamkowy. After a short speech, in which a necessity of greater engagement was pointed out, at 6pm. according to plan, this year's manifestation had ended, and participants went their own ways in high spirits