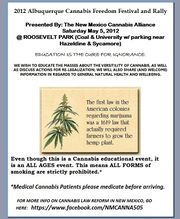 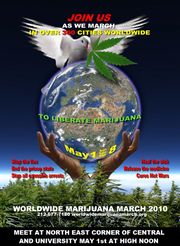 The Marijuana March and Festival of Friends was enjoyed by many. It began with 100-200 people gathering at noon to protest the hypocrisy of the marijuana laws. With the assistance of New Urban Transport sharing their area with us we we able to give out posters for the march, and offer shirts and water, as well.

They got to meet our Queen of the event, Ms "Essie" DeBonet. Her battlefront is won gram by gram, pound by pound as she tries to add weight to her frail but vibrant body. To see her shine come out is such a beautiful thing to see.

From there everyone was invited to La Vega Lounge. A place next to the river with a host from the heavens. Andy came through when complications arose from the City as they hesitated on giving their approval. The Event began at 4:00and lasted till 2:00 a.m. where we learned that ending with a thrasher band doesn't sit well with the neighbors according to the police. They were very civil even if they weren't too happy. After receiving the assurance that the festivities were officially over they left shortly thereafter.

But throughout the day we had over 14 bands play with food finally showing up after unexpected problems. The raffle was a big hit as people won a variety of prizes. The Lava Lamp in the shape of a head was one of the prizes. With Birdland, Garcia Mitsubishi, Unwind a Touch, and even our own director Fred McDonald donating items to the raffle there were a lot of happy people at the event.

Again our many thanks to Andy-the Host, Barbie, Rob, John, Mike, Laverna, and Adam for all their help.

The evil history of the US Senate filibuster, or why the US no longer has simple majority rule. [114].

US middle-class wealth has collapsed. [116]. See chart below.

Medicaid, Medicare, Social Security all came from Democrats. You pay the taxes while healthier. Republicans prefer you die. 50% in U.S. Fear Bankruptcy Due to Major Health Event. [119]