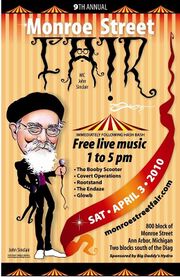 "The Hash Bash in Ann Arbor is the Nation's oldest marijuana Rally." [77]. There have been other cannabis rallies in the USA before 1972, but they haven't continued on for as many years. Info follows from Hash Bash (Wikipedia): The first Hash Bash was held on Saturday, April 1 1972 in response to the March 9th 1972 decision by Michigan Supreme Court declaring unconstitutional the law used to convict cultural activist John Sinclair for possession of two marijuana joints. This action left the State of Michigan without a law prohibiting the use of marijuana until after the weekend of April 1 1972.

If he was the CIA,
Selling dope and making hay,
He'd be free, they'd let him be.
Breathing air, like you and me.