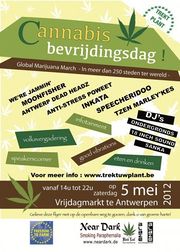 Today at the Worldwide Marijuana March in Antwerp 4 members of Trekt Uw Plant got arrested on the accusation that they planted a seed and some others because they were protesting against this arrest. Details will follow later. Meanwhile everyone is safe and free after 6 hours of detention and interrogation, the manifestation could continue and was visited by 150 people. The manifestation that was not intended as a blow in (open air cannabis consumption room), became a blow in after the intervention of the police, as a natural consequence of the fact that people came together on that place and the fear of the police for further escalation.

Books, T-shirts and flyers have all been confiscated, as well as 84 seeds, and four people at (each less than the officially tolerated 3 grams) cannabis on him. The police action seems to be politically motivated by the lord mayor of Antwerp, Patrick Janssens (also known as El Kapoen), who apparently ordered this directly without consulting the prosecutor nor the public order section of the Antwerp police force, who had given us permission to realize the event knowing perfectly well waht we were going to do: plant a seed of one cannabisplant for each member of the Trekt Uw Plant association.

The event has been filmed - there will be scenes from it available soon.

The GMM in Antwerp, Belgium, on 13 may was a modest manifestation: only a handful of people showed up. The weather was fine, but fear was in the air: Two days before in Antwerp, a man of 18 had shot three people because of the colour of their skin and killed two of them. And as always in Flanders, people have difficulties in showing publicly their support for legal cannabis. One of the major political forces here, the fascist-oriented nationalist party Vlaams Belang, had announced a counter-demonstration, and the local police showed up the with the usual performance. Currently, Vlaams Belang has 34 % of the votes in Antwerp, it could very well come to power at the next elections.

The positive news is that we obtained great press coverage (articles in two national newspapers, local television) and for a change, positive media coverage!

One of the objectives of the GMM in Antwerp was the presentation of a new association of cannabis consumers and producers, called "DRAW UP YOUR PLANT", that would start a collective plantation in the coming months. The new association wants to use the principle of giving each adult member the opportunity to grow 1 plant, which according to Belgian legislation, would fit in the category "cultivation for personal use" which has the "lowest priority of persecution".

The new association is planning to start its plantation in June, so when the local elections in Antwerp will take place in October, it would be the time of harvesting.

We had a lot of bad luck: heavy rain and wind, the early hour (chosen in order not to compete with Gay Parade in Brussels and a music festival close to Antwerp), late start of publicity campaign as the authorities delayed the permission for weeks, the fact that we could not start in time because unexpectedly, there was a funeral going on in a church close to the venue, the overwhelming presence of police (at least a 100 cops, water cannons, many officers in civilian at or around the place) and a counter demonstration by the Flemish Block Youth Party, a fascist party we have here in Flanders (Dutch speaking part of Belgium).

The theatre started before we even had built our stage. Around the planned hour of start of the event the approx. 10 counter demonstrators came marching on to the square. When the police tried to stop them, they threw a stink bomb, that spread quickly because of the wind. When they found out that this was affecting mostly the crowd who was just saying goodbye to a dead relative, the counter demonstrators disappeared quickly.

Half an hour later we could finally start with entertaining presentations, music, explanation of the Belgian cannabis law, music, high class poetry by the anti-stress poet and witnesses of the war on drugs.

At best, there may have been some 30 participants. But among them several journalists, who covered the event in newspapers and a local TV station and included that this was an event to denounce the war on drugs.