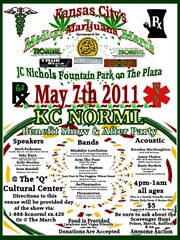 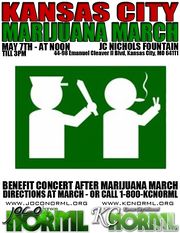 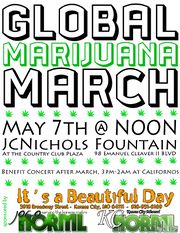 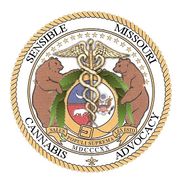 Kansas City is divided by the border between Kansas and Missouri. To avoid duplication, info and links are consolidated here.

Kansas City is divided by the border between Kansas and Missouri. See the Google map link below. 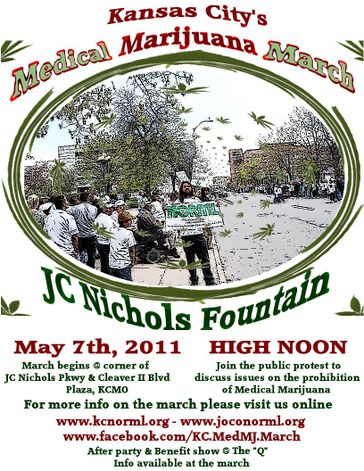 WHAT: The march will be sponsored by Kansas City NORML and JoCo NORML. This event has been running 5-years strong thanks to Edward DeWolf, KCNORML Executive Director.

WHEN/WHERE: After marching throughout the Plaza, from the JC Nichols Fountain at noon on May 7th to a place that will have music, speakers and educational information about cannabis reform. More to be announced soon!

June 1st, 2009 Brandon C. Ryan founded Kansas City NORML, Inc.. Brandon had left the organization in May of 2010 due to illness. Heath Poland took over as President and the group has been perceived to be mostly Libertarians.

Read a review on the event:
http://www.kcnorml.org/news.php?item.7.2

If you live near Kansas City, and you didn't come to this event.... YOU MISSED OUT!!!! It was the best protest I have ever been to - even better than Seattle Hempfests because we were out in the public eye, getting "regular" people to THINK about the laws we live under! It was a blast - THANKS, MOHEMP!!!

First, there were about 80 people there on the corner, many holding signs for the cars. It was very positive, not angry or anything, and there were NO POLICE cars!! I felt so FREE! I'm sure they were there, but I really have to give KC Police a hand for not making us feel all hated and oppressed! THANK YOU, Kansas City, MO Police!!!

Then, after about 30 minutes, we all went on a sidewalk march - FUN!! People had fun chants, we were telling everyone that we are not criminals, that 8 billion dollars a year are spent for nothing, and people were amazed by us, but in a good way! People were honking, cheering, no negativity - it was a dream!

We walked on to this gorgeous park for great bands and motivating speakers. Again, Kansas City has shown brilliance by putting a park in downtown so well, you feel like you're in the middle of the woods!

It was the most peaceful, freedom-filled day I think I have ever had. Everyone was so nice. I just looked around at the groups of folks, talking quietly and having a relaxing time, and I wondered, "HOW could THIS be outlawed?"
Our laws must change, and soon.