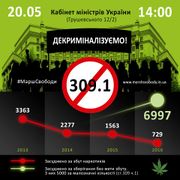 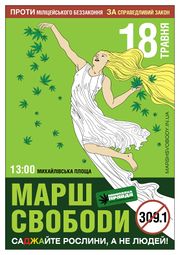 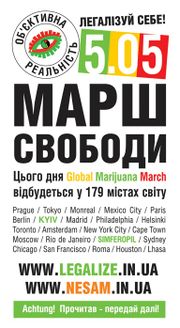 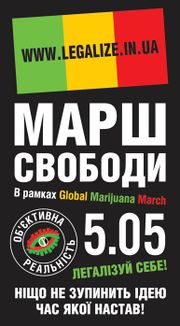 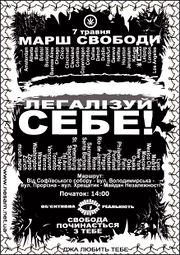 Event will take place Saturday, 18 May 2013 at Mikhailivska pl. at 14:00. Everybody is welcome. Legalize it together!

The day before local authorities has made the verdict from the court - prohibition for the mmm organizers to make their rally. And 10 special police cars (for arrestees) were standing on the mmm's gathering place early in the morning - to show all the participants what's waiting for the mmm. There was The Day of Europe celebrating in Ukrainian capital this day: a lot of EU-tourists in the very center, huge EU banner on the front of Ministry of Foreign Affairs and 10 "avtozaks" (jail-cars) around the MFA building with their doors opened. The arrangement was - to give the mmm a fright. MMM leaders were warned - they will be arrested in case they will be there to provide the rally. So we've made quite radical action - a dozen of activists appeared on the square in the front of MFA with the black banner "Is it the Day of Europe?". MMM's coordinator Taras Ratushnyy used the iron chain and the padlock to be linked with massive fencing.

"We have not another way to save the freedom in this country and also to protect the people, going to support our demands" - Taras Ratushnyy declared. While activists were speaking to media, explaining the demands (special parliament session to discuss the drug-war reality, stop the police drug-mafia recket and the amnesty for the smokers in jails), nearly 200 of mmm participants joined the crowd. "MMM in Kyiv is delayed - firstly to avoide the provocations and fight the outlaw verdict". Cops were standing closely ready to react but a lot of journalists were there all the time with the crowd, so they decided to wait and then to arrest the chained person - special equipment to cut the chain was prepared. After 1,5 hours of such a speaking there was a solution to leave the square by several groups - one after another. When the last group had the square crossed in safety, padlocks were opened quickly and chained person withdrew on the back seat of motorbike, prepared for this moment. Nobody was arrested this day, mmm participants were replaced in safety to the reggae open air in 500 metres from the square - in the green zone.

Facebook image source with comments. Info: [97].
The quote from John Ehrlichman (in 1994) is from an April 2016 Dan Baum article in Harper's Magazine: Legalize It All. How to win the war on drugs. Quote: “The Nixon campaign in 1968, and the Nixon White House after that, had two enemies: the antiwar left and black people. You understand what I’m saying? We knew we couldn’t make it illegal to be either against the war or black, but by getting the public to associate the hippies with marijuana and blacks with heroin, and then criminalizing both heavily, we could disrupt those communities. We could arrest their leaders, raid their homes, break up their meetings, and vilify them night after night on the evening news. Did we know we were lying about the drugs? Of course we did.”

The evil history of the US Senate filibuster, or why the US no longer has simple majority rule. [98].

US middle-class wealth has collapsed. [100]. See chart below. See: Income inequality and drug war. And: Wikipedia: List of countries by wealth per adult.? Median wealth is exactly in the middle. 50% of adults have more, and 50% have less. Wealth is all assets (money, stocks, property, etc.) minus all debts.

Middle class wealth collapsing. [101]. And: Just 8 men own same wealth as half the world. See Wikipedia: Wealth in the United States.

Medicaid, Medicare, Social Security all came from Democrats. You pay the taxes while healthier. Republicans prefer you die. 50% in U.S. Fear Bankruptcy Due to Major Health Event. [103]