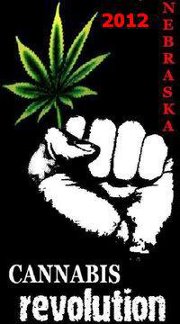 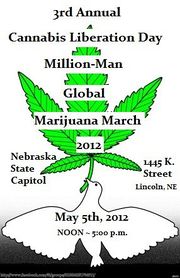 This year's demands: No more arrests of patients and their caregivers for medical cannabis No more violent law enforcement tactics Let the hemp industry begin in Nebraska Let peer-reviewed science decide if pot is safe or not Harm reduction and treatment on demand Ibogaine treatment instead of incarceration TO GET THERE WE ADVOCATE REMOVAL OF "MARIJUANA" and IBOGAINE FROM NEBRASKA'S CONTROLLED SUBSTANCES LIST Speaking organizations will be: NORML, Cures Not Wars, Veteran's Groups, Seizure Baby Parents, and more.

This year's demands: No more arrests of patients and their caregivers for medical cannabis No more violent law enforcement tactics Let the hemp industry begin in Nebraska Let peer-reviewed science decide if pot is safe or not Harm reduction and treatment on demand Ibogaine treatment instead of incarceration Speaking organizations will be: NORML, Cures Not Wars, ACLU and more. Sign the Nebraska Medical Initiative - Learn How to Petition

Please join the Nebraska Cannabis Coalition May 5th, 2012, Saturday, for the "3rd Annual Cannabis Liberation Day" at the Nebraska State Capitol building, NORTH SIDE, in Lincoln from HIGH NOON 12PM-5PM, to protest & rally for the END the illegal & unconstitutional prohibition of Cannabis and Hemp!