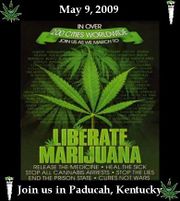 Paducah 2020. By the year 2020 Paducah's economy will have completely healed because of the area's rich river and creek bottom land, the decriminalization of cannabis and the secession of the former Jackson Purchase region from the insanity of convention and the degeneration of the status quo.

With cannabis freely cultivated and growing wild, an atmosphere of freedom and local economic self-reliance budded from apparently nowhere. People who were once marginalized: poor, needy and in constant danger of arrest and incarceration got together and formed a thriving green economy thanks in part to the intrinsic value of marijuana and hemp products. They also learned to live without fossil fuels and to raise their own high-quality organic Kentucky burley tobacco, thus breaking the political and economic stranglehold that existed only a decade before. Paducah2020

A bicentennial observance of the 1811-1812 Seismic events is being planned as an awareness and preparedness campaign. The plan contains "legitimate" agenda items, so beware.

In 2000 Paducah hosted the first Million Marijuana March in the state. We continued until now to raise awareness to the vast numbers of citizens suffering as a result of cannabis prohibition.

Participating as part of the Cures-Not-Wars wordwide march organized to raise awareness, we will again on May 8, 2010 proudly host the Kentucky Marijuana March in Paducah.

We have had many musicians , speakers and vendors generously offer to donate time and talent to our march this year. We have had to regretfully decline all kind offers because of an issue with event insurance. It's $750 and we cannot afford it. Fund raising has been tough this year with the economy in it's current sad state.

We'd like to say thank you, though...and we will be at Dolly McNutt Plaza for the 10th year. There will be like minded people, but no entertainment, except what we make ourselves. WE WILL WELCOME ACOUSIC GUITAR PICKERS, SINGERS, POETS, DRUMS, ETC. We can still have fun!

Being across the street from the police station puts many people off. We understand. But, they have never bothered us. Not once. I respect that...cuz we're not doing anything wrong and they shouldn't bother us. The cops know the truth...cannabis doesn't cause near the troubles as real drugs and alcohol.

On a personal note from me, I'd like to remind you closet smokers that we are fighting for YOUR rights, too. But, at some point, you have to stand up for your own. We need numbers, people willing to work for the change that we all desire and demand. And we need voters. So, if you're thinking it's gonna be a pot party, well...you'll be disappointed. Maybe next year! Peace, Cher

We hope that you will come join us!

Who I'd like to meet:
Anyone who is concerned with liberties lost as a result of cannabis prohibition. All who stand and fight for God's most sacred plant, those that choose to use or not (aka FREEDOM), who respect life and choice. Everyone that has been looking for ways to create the changes in our drug laws that need to happen. Anyone who has been arrested on cannabis charges or had your life profoundly affected because of it...good or bad. If you are a patient who depends on this miracle plant for your quality of life. Come share your experiences or learn from others.