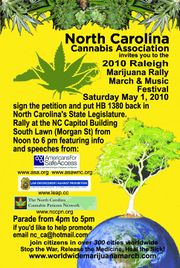 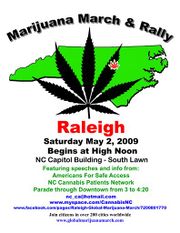 The North Carolina Cannabis Association held a rally, march, and music festival from noon until 8pm on Sunday, May 6, 2007 on the grounds of the NC State Capitol Building in downtown Raleigh, NC. The crowd grew to around 300 people at it biggest, however, around 500 people made it out at one time or another. There were no arrests. The local newspaper featured an article. (The NCCA plans on holding an even bigger rally for 2008.)

A number of speeches, rants, freestyle spoken words, and stories were voiced on the open mic from a variety of local activists and groups. There were performances by the bands: High on Weed, Git Lit, Kings of Prussia, Broadslab, Shiloh, Nilah, and Doco.

The North Carolina Cannabis Association held a rally, march, and music festival from noon until 8pm on Sunday, May 6, 2007 on the grounds of the NC State Capitol Building in downtown Raleigh, NC. The crowd grew to around 300 people at it biggest, however, around 500 people made it out at one time or another. There were no arrests. The local newspaper featured an article. (The NCCA plans on holding an even bigger rally for 2008.)

A number of speeches, rants, freestyle spoken words, and stories were voiced on the open mic from a variety of local activists and groups. There were performances by the bands: High on Weed, Git Lit, Kings of Prussia, Broadslab, Shiloh, Nilah, and Doco.

Facebook image source with comments. Info: [92].
The quote from John Ehrlichman (in 1994) is from an April 2016 Dan Baum article in Harper's Magazine: Legalize It All. How to win the war on drugs. Quote: “The Nixon campaign in 1968, and the Nixon White House after that, had two enemies: the antiwar left and black people. You understand what I’m saying? We knew we couldn’t make it illegal to be either against the war or black, but by getting the public to associate the hippies with marijuana and blacks with heroin, and then criminalizing both heavily, we could disrupt those communities. We could arrest their leaders, raid their homes, break up their meetings, and vilify them night after night on the evening news. Did we know we were lying about the drugs? Of course we did.”

The evil history of the US Senate filibuster, or why the US no longer has simple majority rule. [93].

US middle-class wealth has collapsed. [95]. See chart below. See: Income inequality and drug war. And: Wikipedia: List of countries by wealth per adult.? Median wealth is exactly in the middle. 50% of adults have more, and 50% have less. Wealth is all assets (money, stocks, property, etc.) minus all debts.

Middle class wealth collapsing. [96]. And: Just 8 men own same wealth as half the world. See Wikipedia: Wealth in the United States.

Medicaid, Medicare, Social Security all came from Democrats. You pay the taxes while healthier. Republicans prefer you die. 50% in U.S. Fear Bankruptcy Due to Major Health Event. [98]