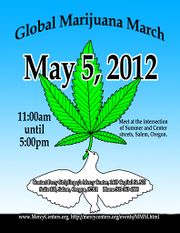 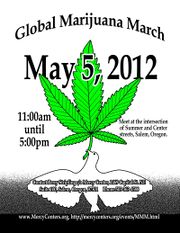 Marches for Global Cannabis Liberation * Also known as the Million Marijuana Marches, this Action item is organized by MERCY - the Medical Cannabis Resource Center * visit >> MercyCenters.org for more on MERCY.

MERCY assembles annually for this event, on the (first) Saturday (in) May, starting at 11am, at the far end of the mall across from the steps of the Capital Building, Salem, Oregon. Officially, the intersection of Summer and Center streets. At High Noon (sharp!) we March, Visit > mercycenters.org/events/MMM.html - for map and more.