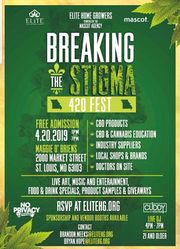 St. Louis began marching in 2000 with the first 'March to the Arch'. Hosted by St. Louis NORML, the event begins in Keiner Plaza at 4:20 pm and proceeds to the Gateway Arch. http://gstlnorml.org/ Cannabem Liberemus