From Cannabis
(Redirected from Topeka)
Jump to navigation Jump to search

Share link: Topeka. Local or regional cannabis-related links wanted. See cities by country on GMM map of all cities. See all cities (not just Global Marijuana March). See the yearly city and event lists for additional Facebook and other links. 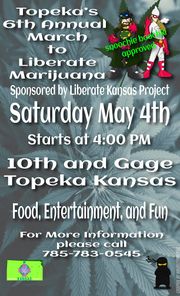 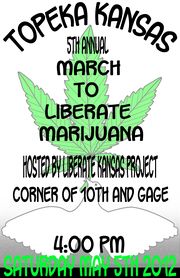 I dressed nicely and drove the 2 hrs to Topeka with a big, "Make Pot Legal 555.org" sign on the back glass while going 55 mph. (I believe in supporting our troops by not having them die for the oil we waste. 55 is faster than a horse!)

I just couldn't believe the coincidence. On the very opposite corner from the rep's office, there was a dedication of a memorial to fallen law enforcement officers going on. So, out of respect for the family members, I took my sign in the opposite direction, hoping to run into other people with signs like mine. I was stopped by one very friendly police officer who asked, "Are you for real?" and I gave him a flyer and explained how the police should never have to die in the drug war; how drug abuse is a health problem, not a law enforcement problem; and how I think the relationship between police and civilians has been hurt by the drug war. He was VERY receptive, but mostly amused, I think. He was nice, that's all I know!

I found a busy intersection, waved my sign happily & proudly, and I've never heard so many honks for legalization anywhere else - not even in California! Only 2 negative responses (No birds this time, yeay!) and it was GLORIOUS! I did not expect that from KANSAS! I stayed there about 90 minutes, then hand delivered some cannabis information to ex-Representative Ryun's office. It included an "End Cannabis Prohibition" flyer, a "Law Enforcement Against Prohibition" flyer, a personal testimony on how cannabis helped me, and a card from Americans for Safe Access about the rescheduling of cannabis. Then I went home, and it was a GREAT DAY FOR FREEDOM, Thank You, LORD!

May 2005 events are detailed on the "Things I've Done So Far" page. I hope all this is helpful to you! Rock On For Freedom!!!