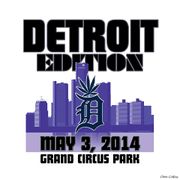 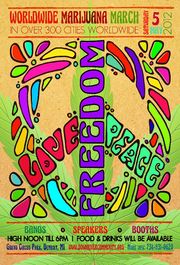 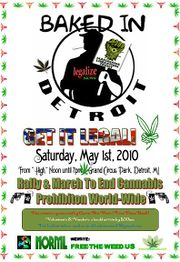 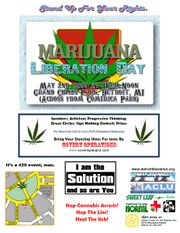 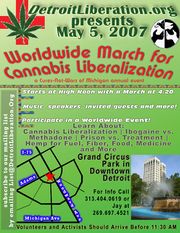 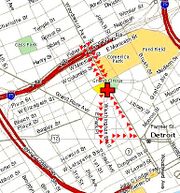 The event is co-ordinated by several persons, including Paul Pearson who independently runs the group DetroitLiberation.org (see [87]), and Jay Statzer, who runs 'Cures, Not Wars' of Michigan (see [88]). Other prominent participants include local anti-nuclear activist Hi-Lo Bob and Dr. Funkenstein, who runs SweetLeaf420.com (see [89]).

Facebook image source with comments. Info: [102].
The quote from John Ehrlichman (in 1994) is from an April 2016 Dan Baum article in Harper's Magazine: Legalize It All. How to win the war on drugs. Quote: “The Nixon campaign in 1968, and the Nixon White House after that, had two enemies: the antiwar left and black people. You understand what I’m saying? We knew we couldn’t make it illegal to be either against the war or black, but by getting the public to associate the hippies with marijuana and blacks with heroin, and then criminalizing both heavily, we could disrupt those communities. We could arrest their leaders, raid their homes, break up their meetings, and vilify them night after night on the evening news. Did we know we were lying about the drugs? Of course we did.”

US middle-class wealth has collapsed. [105]. See chart below. See: Income inequality and drug war. And: Wikipedia: List of countries by wealth per adult.? Median wealth is exactly in the middle. 50% of adults have more, and 50% have less. Wealth is all assets (money, stocks, property, etc.) minus all debts.

Medicaid, Medicare, Social Security all came from Democrats. You pay the taxes while healthier. Republicans prefer you die. 50% in U.S. Fear Bankruptcy Due to Major Health Event. [108]