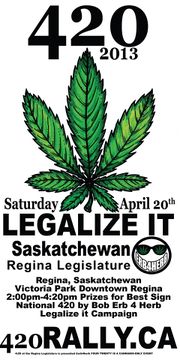 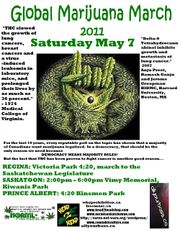 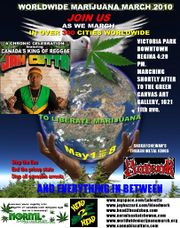 Tom Shapiro from the Sask Marijuana Party talked about the prohibition laws in Canada and how our government is ignoring scientific evidence and lying to the public. Jim Elliott from the Council Of Canadians, which is a Canadian sovereignity group, talked about trade agreements like The Security And Prosperity Partnership and how they put control over our legal system into foreign hands.

We had a sign and banner contest with lots of participants, prizes included a vaporizer from Head2Head novelties and "Weedhustler: The Board Game" provided to us for free by Doin' Deez Gamez Inc. We tried to have a lot of musical variety, but it's based on who shows up so we had a rapper who only did a 4 minute set and then we had 2 actual bands, both metal, The Archaeus and Bloodrich.

During Bloodrich's set, an elderly woman walked into the stage area and started attacking the band while they were playing. She was screaming for us to get out of her neighborhood. I kind of knew something like that would happen, and I tried to avoid it but I was trapped in this position. City Hall decided to stop issuing park use permits for Victoria Park, but didn't tell us until the last minute. We got one for Central Park and arranged to have a march from Vic to Central, which is only 3 blocks. But Victoria Park is surrounded by businesses, which are closed by the time the bands start, so it's never been a problem.

Central is surrounded by apartment buildings and a senior citizen's highrise. I told city hall it would be a problem, that we always had metal bands at our events because that's who plays for free, but they insisted.

Drums weren't even miked, p.a. was only for vocals, so everything was kept at the drum's level, literally as quiet as metal can be. So, yes, it was very loud.

We didn't get shut down. Police told us there were complaints but that we could keep it up until 10 if we wanted because we had our permit in order and we were in the right, but I tapered it off and ended it early, around 8:30, because the crowd was thinning out anyway, and to avoid pissing off the local community any more than I already was.